Insert compatible with Underwater Cities®, and the New Discoveries® expansion. The design provides both efficient storage and improved game play. Many of the trays can be utilised during the game, and they greatly aid set-up and clear-away times. The rules and boards act as a lid on top of the trays. The insert has space for the components of the game and expansion, but not the expansion boards. The New Discoveries boards need to be kept separately in the expansion box. There are two trays for the game cards, with one slot for each of the three eras, and one for the other cards. There is space for all cards to be sleeved with quality sleeves. The tray corners' design has been made to imitate the city domes from the game. There are two trays for the plastic city domes, one for each type. There are two separate trays for the farm, desalination plant, laboratory, tunnel, and credit tokens. These can be placed on either side of the game board to put them in easy reach of all players. There are two trays for the resource tokens each with two slots for the 1 and 3 denomination tokens. There is one tray for the metropolis tiles with separate slots for the blue and green types. There is one additional tray for the other game tokens.As mentioned above many of the trays can be used during the game to organise the components and make access by all players easy. When packing the box, first place the main game board and player info cards on top of the insert trays. Then place the player boards, followed lastly by the rule books. This fills the box and allows for vertical storage of the game. As mentioned above, the New Discoveries expansion boards need to be stored separately in the expansion box itself.This product consists of a flat-pack of 4 Evacore sheets. The trays require assembly, which is quick and fun, using ordinary PVA glue. Detailed instructions are included in the package. 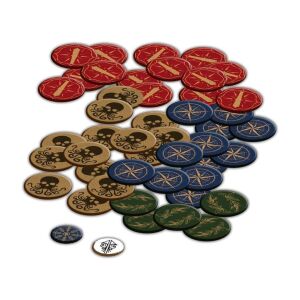 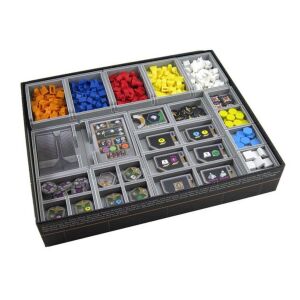