Insert features:
One monster standee tray
One monster standee base tray (with space for 10 bases)
Two trays for evolution cards
One bottom-less tray for power cards
Two trays for cubes and tokens
one tray for up to 14 dice
There is space for all cards to be sleeved.
The trays can be used during the game to organise the components and make access by all players easy. When packing the box, first place the large King Kong tower pieces above the monster dials. The smaller tower parts can be placed with the monster standees. Next place the rule books on top, followed lastly by the game board. This will fill the box to the top, with the lid closing flush, and allowing for vertical storage of the game. Insert is also fully compatible with King of New York®, including again the Power Up!® and Halloween® expansions, as well as the King Kong®, Cthulhu®, Anubis®, and Cybertooth® Monster Packs®. Note that due to the thicker folding board provided for this version of the game, the box lid will not close fully flush and will rise by 3 mm. The game box can still be stored vertically. When used with King of New York® the monster standee base tray also stores the building/unit tiles, both from the main game and the Cthulhu® expansion. This product consists of a flat-pack of 3 Evacore sheets. The trays require assembly, which is quick and fun, using ordinary PVA glue. Detailed instructions are included in the package. 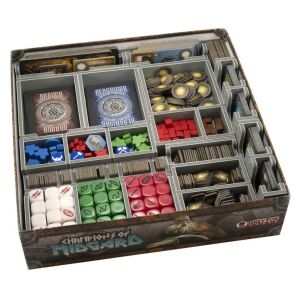