Jeanne d’Arc (1412-1431), French saint and heroine. Ardently religious, at seventeen, the French Dauphin assigned her a small army and she obtained a series of successes that initiated the defeat of the English forces. She was captured by the English and accused of witchcraft and heresy, then condemned by the Inquisition and burnt at the stake. She was canonized in 1929.

She “Orleans Maiden” Project was undertaken at PanOceania’s request to create a military leader able to inspire troops in the most difficult combats. Someone charismatic was required, who was able to turn the tide in an adverse situation, with extreme courage, anger and ferocity. Only the rumours of the arrival of Joan to the frontline are enough to elevate the troops’ moral and prompt them to accomplish impossible missions. Under her command, men will fight until the end. Her presence in combat is an unequivocal sign of victory. Joan is touched by the hand of God. Her eyes are like two burning coals and her voice is like a hurricane. Her figure incarnates the Christian concept of aura and power.She is the mother-warrior of PanOceanian soldiers, women admire her and men love her. 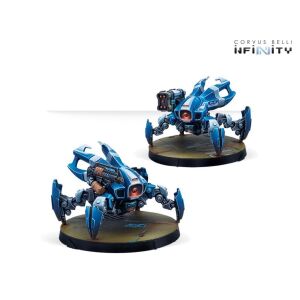