Dice Upon a Time engl.
Dice Upon a Time is a family adventure game which takes you to the fabulous fairy-tale world of the Grimm Brothers. You will play the most popular Grimm characters, such as Little Red Riding Hood, Snow White, Puss in Boots, Sleeping Beauty and The Musicians of Bremen, while completing Quests for Adventure Points. As you progress in the game you will encounter old friends in familiar places, employ Magic Items, and build your strategy on story fragments as well as on the unique abilities of the main characters.

The game's innovative movement mechanism is based on a set of special dice. You place the dice on the board tactically, often on top of each other, to get ahead of your opponents, or even block their way. All the while doing your best to exploit the advantages offered by the various special die faces.

The rules are simple enough for kids, but the game has enough depth and combinability, so that more experienced players don?t consider it a child?s game.

HEXplore It: Valley of the Dead King engl 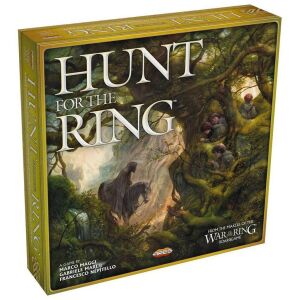 Hunt for the Ring - EN