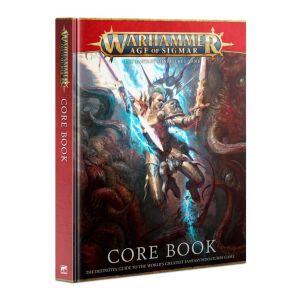 The ultimate companion for both new and experienced Warhammer Age of Sigmar players, this 360-page hardcover book contains everything you need to know to collect, assemble, paint, and assemble Citadel Miniatures of the Mortal Realms to play with them.

The Basic Rulebook begins with the “Realms of War” chapter, an overview of the Warhammer hobby with a brief guide to collecting, building, and painting your miniatures, as well as several ways in which you can use them to make games of Warhammer Age of Sigmar to discharge.

A war without an end

In the first background section, explore the illustrated history of the Mortal Realms to the present day, from the arrival of the God-King of Men to the savage Era of the Beast. It spans three great ages:

Dive into background information on each of the eight mortal realms - Azyr, Shyish, Aqshy, Chamon, Ghur, Ghyran, Hysh, and Ulgu - their connections, descriptions of the indigenous civilizations that rose and fell, key events that occurred , and contain considerable geographical features, as well as details on the realm of Chaos, a nightmarish dimension in which the Chaos gods and legions of appalling abominations live.

Learn all about the factions and alliances that fight in the Mortal Realms, each of which has its own gallery of beautifully painted Citadel miniatures, divided into four sections that correspond to their Grand Alliances. Starting with the Forces of Order, you'll gain insight into each of the factions that make up the last bastion of civilization in the Eight Realms (even if they don't always get along) before entering into negotiations with their archenemies of the Forces of Chaos. Nagash's covenant of death, on the other hand, wants to seize every single soul in the realms, while the great covenant of destruction surrenders to its primeval instincts and sets off on a raging march of destruction alongside its new deity Kragnos.

The first rules section of this book describes the basic concepts you need to fight battles in Age of Sigmar, and familiarize you with line-up, battle rounds, hand-to-hand combat, magic, and more. The rules are presented in a clear and concise manner, accompanied by additional designer notes, making it the most accessible rulebook in Warhammer history.

Once you've digested the basics, here are the three basic types of play and the associated battle plans for each of them.

Free game
Let your imagination run wild, because it is particularly suitable for replaying all the stories or tactical challenges that come to mind, without any restrictions.

Balanced game
In the balanced game, the players should meet at eye level, and equal chances of victory are guaranteed by point-based army construction rules and a competitive set of battle plans.

Narrative game
With a revised section of the narrative game rules, let your army walk the path of glory and watch it evolve through the games. Earn fame, gain new skills and even expand your army's territory with no restrictions on how, where and when you play.

The final section helps you depict the myriad of battlefields and endless wars waged by the rulers of the Mortal Realms, including rules for the various, more remote types of battlefields, on, above, or even below which you may go into battle.

It contains three types of games designed to be fun for players including:

The basic rulebook ends with a handy alphabetical index and a photocopiable "Path of Glory" army summary, battle map, and army list.